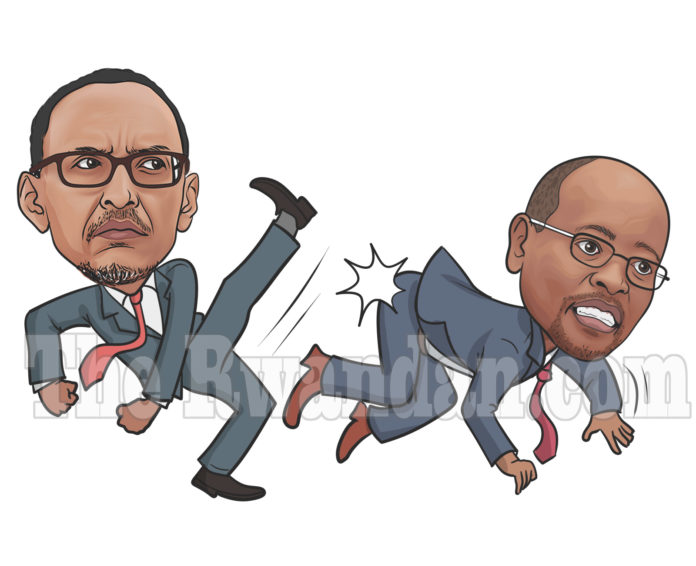 Yesterday after arriving in Kigali from what criminal Paul Kagame called a humiliating, disastrous and regrettable trip to Kampala Uganda, where he travelled for a one day meeting with his former adopted father, now nemesis – President Museni.

For those who think that yesterday’s Entebbe meeting solved anything, forget that, instead the meeting exacerbated the already worsening diplomatic stand between these two brotherly states.

Criminal Paul Kagame told the above members how president Museveni humiliated him and wondered how would someone invite a fellow president for the purpose of humiliating him. He also lamented the same words to the team which had travelled with him.

He also noted to both the team which had travelled with and the night panel at Village Urugwiro that “how would some body that you know very well all inches of his body treat you like that?” The furious junta lamented. We have to remember that criminal Paul Kagame was among the original few fighters who attacked Kabamba in 198, during the first NRA military attack.

Back to village Urugwiro, with the individuals whom he had summoned already at Village Urugwiro. After a brief lamenting on Museveni and his humiliating trip to Kampala. He then directed the anger which he had against President Museveni to his embattled former super minister James Musoni. Other participants supported their criminal Boss in laying down all the mistakes that James Musoni has always been doing. It was a deadly panel which judged the fate of James Musoni.

My very reliable informer who is close to this dossier confined that James Musoni was spat and slapped during Sunday night meeting at Village Urugwiro. Throughout the meeting James Musoni was crying like a baby and begging/asking for forgiveness while kneeling down.

The panel agreed that Musoni has to get ready to submit his resignation. Criminal Paul Kagame instructed Gen Dan Munyuza and Francis Kaboneka to totally dismantle James Musoni’s network in administration and in business. Dear Rwandans, trust this is going to be chaotic as James Musoni’s business partners are going to be hit hard in few days to come.

When retarded, inept, buffoon sycophants and goons are fighting over spoils of war; don’t dare interfere. Let the greedy, poisonous assassins and the satanic system bury itself.

Kanyarwanda - 6th May 2017
0
A while back when the presidential candidate Padiri Thomas Nahimana arrived in Kenya on his way to compete against President Paul Kagame, the Rwandan...