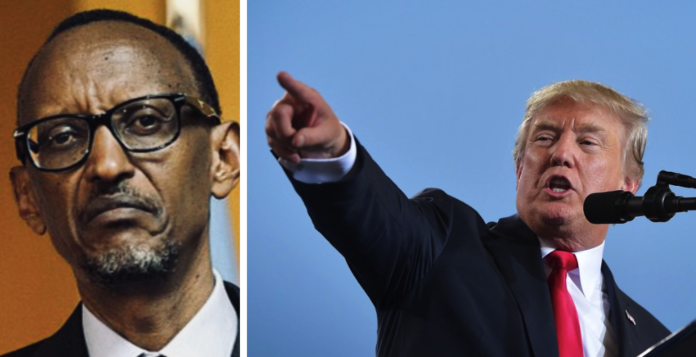 The US government’s foreign aid will significantly shrink in 2018. In fact, except for American support for AIDS and malaria, other sectors, including its funding of the World Bank, will see deep aid cuts in 2018. Rwanda will no doubt be affected by these emerging realities.

Previous sectors and levels of American aid to Kagame’s Rwanda

Under the administrations of Bill Clinton, George Bush and Barack Obama, the Rwandan dictator, Paul Kagame, became the American darling, receiving millions of dollars for both socioeconomic development and military aid. For example, American aid to Rwanda comprised the following sectors and amounts in 2016:

As indicated by the above data, the largest component of American aid to Rwanda was health. Besides AIDS program at US$43 million was malaria at US$7.4 million and strengthening health systems at US$6.4 million — thus totaling US$56.8 million. Peacekeeping at US$36 million and literacy training activity at US$26 was second and third largest donations.

Kagame-Trump relationship does not look good. When the American head of state invited African leaders at the United Nations in September 2017, Kagame was not among the invitees. The Rwandan dictator was deliberately left out in the cold. The issue seems to revolve around the fact that Kagame is the Clintons’ darling — which is a no no with Trump.

The unfolding American reality is larger than Rwanda, however. To fully grasp Trump’s attitude to foreign aid, we must appreciate how he has gutted the budget of the US Department of State which is responsible for the sector. Five affected areas of the 2018 budget may be highlighted as follows:

1. AIDS AND MALARIA: “Provides sufficient resources to maintain current commitments and all current patient levels on HIV/AIDS treatment under the President’s Emergency Plan for AIDS Relief (PEPFAR) and maintains funding for malaria programs…”

2. MILITARY AID: “Shifts some foreign military assistance from grants to loans in order to reduce costs for the U.S. taxpayer, while potentially allowing recipients to purchase more American-made weaponry with U.S. assistance, but on a repayable basis.”

4. ECONOMIC DEVELOPMENT: “Refocuses economic and development assistance to countries of greatest strategic importance to the U.S. and ensures the effectiveness of U.S. taxpayer investments by rightsizing funding across countries and sectors…”

5. THE WORLD BANK: “Reduces funding for multilateral development banks, including the World Bank, by approximately $650 million over three years compared to commitments made by the previous administration. Even with the proposed decreases, the U.S. would retain its current status as a top donor while saving taxpayer dollars.”

As indicated above, the only part of American foreign aid that will remain intact in 2018 is AIDS and malaria. The rest of US foreign aid – military aid, peacekeeping, economic development, and the World Bank – will be sharply reduced. These are areas that have in the past greatly benefited Kagame’s Rwanda.

According to the 2018 US Department of State budget, the only safe items in foreign aid is AIDS and malaria. In the Rwandan case, these two items accounted for only US$49.4 million out of US$162 million total aid package for 2016. In other words, 70% (or US$112.6 million) of American aid to Rwanda is at risk.

Paul Kagame loves to boast that good aid is one that provides temporary support, as opposed to long-term aid that leads to dependency. He may have his wishes in 2018.

Kagame’s Regime Has Gone Crazy – The Case Of The Union...