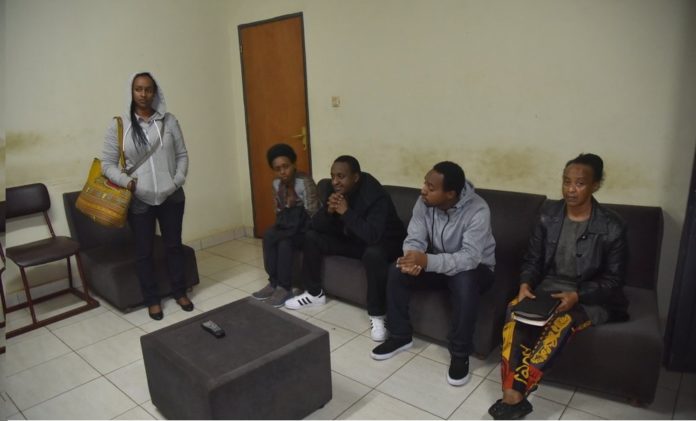 I am afraid that if no strong and urgent intervention is made in Rwanda, Diane Rwigara and her family are going to be assassinated by Paul Kagame and disappear completely from the face of this earth. Torture, persecutions, foul plays, kidnaping, that is the way Kagame Paul kills Rwandan people. That is how Paul Kagame assassinates people in Rwanda. If Diane Rwigara and her family are saved from bloody hands of Paul Kagame, then it means that so many Rwandan people would be saved from the wrath of the vampire Paul Kagame. Diane Rwigara is the voice of the majority who are helpless, powerless and voicelessly in Rwanda and who are suffering too much! Majority of the Rwandan people cannot dare to express themselves openly and publicly over their suffering! Diane Rwigara is our voice! In Rwanda we are all suffocated by Paul Kagame, his police, military, RPF Cadres, various terrorist armed groups, his DMI and secret services.

Diane Rwigara has just committed one crime: to exercise her indisputable right of by daring the dictator during Rwanda 2017 elections where she wanted to stand as a president of Rwanda. Kagame fearing that she was going to send him away in a democratic way like in the case of Yahya Jammeh in Gambia, he decided to block her from presenting her candidacy as a people’s leader of Rwanda. All the allegations being laid against her are false and baseless. Kagame Paul has got a way he uses to clear everyone who wants to challenge politically and democratically him in Rwanda more especially when he or she is an outstanding personality like Diane Rwigara and Victoire Inagbire. Kagame Paul knowing that he is a mediocre ruler, he runs the country of Rwanda by terror, intimidation, kidnappings,assassination and exiling.

Kagame Paul is too much allergic to freedom and democracy and prosperityof other people who are different from him. Kagame Paul does not tolerate superb ideas, free and dependent opinions from other people. Diane Rwigara spoke about serious national issues affecting all the Rwandan people which no one in Rwanda could dare to talk about just to fear what she is going through now.

During his parading or showing off, like in North Korea way,not to say his political campaigns,Kagame Paul, through his DMI secret services, warned strongly Diane Rwigara and her followers that after elections they will deal with her and all her supporters and followers. They were seriously told that they will charge them with treason, after accusing them for terrorism in Rwanda if they don’t denounce Diane Rwigara and stop supporting her.

In Rwanda if you don’t support Paul Kagame in whatever he does or says,then you are unfortunately condemned and labeled as an enemy of the country, hence a treason case is laid against you, either you want it or not! This is the fate of Diane Rwigara, her family and her supporters! Once Kagame Paul labels you as an enemy of the country and then all your friends, your relatives, your family members, your acquaintances, your friends in phone contacts, your neighbors are also all of them labeled as enemies until they publicly come out and denounce you publicly that they are not in Communion with you and they should be ready to come out and testify against you in these fake courts of Rwanda. No one should from then show that he knows you. No one should even talk to you or greet you for fear that they will also be picked by the police which are normally deployed all ever the country. Every one including your brothers and sisters and any relatives or friend who does not want to fall away with Kagame Paul/RPF/Govt has to avoid you. Too sad indeed!

When you are taken in these so called courts of Rwanda, you can never be assured of any justice, you can never win any case, since it is the same machinery that is persecuting you and since most of allegations are politically motivated ad they are just fabricated and fake. So it is just gymnastics they do to take you to court, because they just want to show off and it is just a matter of formality sake! Once Paul Kagame has made a ruling on you that is the end with you. You enter into Rwanda courts already knowing that you will be jailed, since even the years you will serve in prisons are already pre-determined by Paul Kagame himself!

Now all her supporters majority of them have gone missing and no one in Rwanda can dare to speak about such issues, and now as RPF and Paul Kagame are foul playing with her life, they are too trying to make a game on how they will kill them and after she will be assassinated by the police and secret services, Kagame Paul will just make a statement over that in a press conference and it will end there.

One can’t just imagine that not even a single media in Rwanda has dared to talk about her kidnapping, harassment and torture, since in Rwanda there no independent media. All media in Rwanda are controlled by Kagame Paul/Govt/RPF. They only publish or broadcast what they are told to talk about. SOS for Diane Rwigara who is representing the majority suffering people of Rwanda people. Rwandan people have suffered more than enough under Paul Kagame/RPF, since 01/10/1990 up to now! Killing human beings is like a hobby for Paul Kagame! I personally who have survived Kagame Paul’s killings, count more than 30 million who have been killed by Paul Kagame until now. It is matter of finding the independent organization that can do independent, fair and unbiased investigations about Kagame Paul’s killings since 01/10/1990 until now! Saving the lives of Diane Rwigara and her family in the hands of Paul Kagame, means to save lives of thousands of Rwandan people whom she is representing!

Bye Bye James Musoni, the meeting to kick him out concluded...

Kanyarwanda - 27th March 2018
0
By Gakwerere Yesterday after arriving in Kigali from what criminal Paul Kagame called a humiliating, disastrous and regrettable trip to Kampala Uganda, where he travelled...