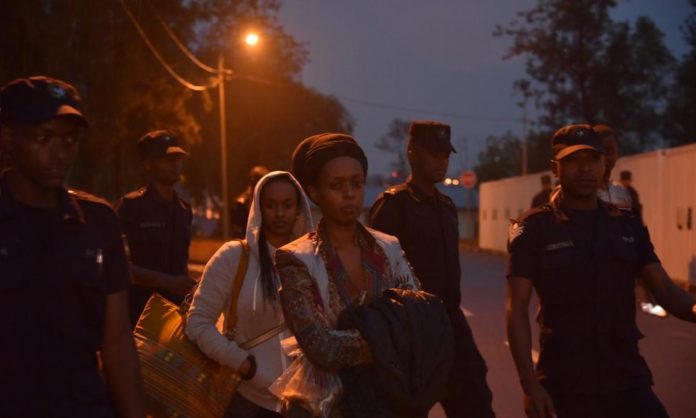 It is human to show sympathy to someone who is undergoing some difficulties and trouble in life. I would like too to join many Rwandan people, people of good will within and outside Rwanda, friends, relatives and supporters of Diane Rwigara during this time when the voice of the majority people of Rwanda is undergoing an unexplained and unjustifiable persecution by the Kagame Paul criminal regime.

It clear that Paul Kagame who is illegally running over Rwanda has grabbed power in Rwanda in order to eliminate all well-meaning people in Rwanda and outside Rwanda so that he continue to parade and showing off as the only sole ruler. Diane Rwigara has showed compassion, care and love for the suffering people of Rwanda and the passion for the positive change in Rwanda.

Diane came out when she saw that in Rwanda those who are supposed to speak for the people of Rwanda are the ones actually who are killing them and continue grabbing them all human rights and human freedom. What Rwigara Diane and her family are going through is what many Rwandan people and families are facing too but they have no chance to express themselves. Diane Rwigara is sign of hope for Rwanda which has been under Kagame Paul and RPF slavery for more than 23 years.

I appeal to everyone who loves peace and democracy to support the noble cause of Diane Rwigara but especially to support the immediate release of Diane Rwigara and her family who are undergoing torture by Kagame police. It is a hard time for Diane and her family. Diane has a heart for all of us people of Rwanda. Diane is our voice. Diane understands the source of the problems of Rwanda. Diane knows our sufferings. Diane has a solution for the problems of the people of Rwanda. She is suffering for being the outspoken person of the poor, the unforgotten, and the weak and voiceless the majority of the Rwandan people. I call upon all the activists in Rwanda, in Africa, in the world at large to join Rwandan people in their struggle for liberation in totality. I call upon all the women to show their solidarity with the suffering family of Rwigara. I raise my voice too appealing to EU, UK, USA who continue to support the serial killings and terrorism of Paul Kagame to stop their contributions to perennial killing us.

Kagame Paul is a dictator and absolute monarch who is determined to eliminate all well-meaning people of Rwanda like Diane Rwigara. I call upon EAC to emulate the good example that was exhibited by ECOAS embers during the time of Yahya Jammeh in Gambia. EAC should also intervene in Rwanda just to help protect the lives of the citizens from Kagame Paul, Rwanda’s Yahya Jammeh. The torture and persecution of Diane Rwigara by Paul Kagame is not giving us hope for the lasting peace, stability, safety and true development.

I remind the police of Paul Kagame that working for protection of all Rwandan is their mandate and obligation. Police of Kagame Paul is called to work for the country of Rwanda and not for Kagame, his RPF and his family only. Police of Rwanda is called upon to be professional ad avoid working using lies. In all its actions, Kagame police has been using lies against the people it persecutes and arrests for no justifiable reason. Kagame police is a disgrace to Rwandan people. Let it be people of integrity and of upright.

Diane is the representation of many Rwandan people. What she fought for is what all Rwandan people want and need. We all know that Rwanda has no legal leader, Diane was to be the people’s leader and she is really is. Let us all the people who love humanity support Diane and demand her immediate release.

Kagame Paul wants to silence and kill all the people who want Rwanda to be better than it is now. Kagame Paul knows that he is leading Rwanda a suicide bomber! Those who continue supporting his terrorism should as well be held responsible for the suffering of the people of Rwanda. Like Diane Rwigara I also challenge the so called Christian believers and churches in Rwanda to go a mile ahead and speak out about the suffering of the Rwanda people.

What hope can a church or a Christian give to the people it can’t speak for the weak and poor in the country?

Kanyarwanda - 3rd October 2017
0
One day you might find yourself in a position of questioning, criticizing or challenging Paul Kagame and his criminal government for their perpetual assassinations,...