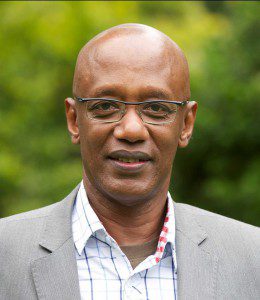 Previously, Himbara has taught at several universities in North America and Africa including the University of Witwatersrand’s Graduate School of Public and Development Management in South Africa from 2010 to 2013. While there, Himbara led a team that succeeded in bringing the World Bank’s Centre for Learning on Evaluation and Results (CLEAR) to the university, where the program supports governmental clients throughout sub-Saharan Africa.

A Rwandan-Canadian, Himbara spent a total of six years working for Rwanda’s President Paul Kagame: from 2006 to 2010 as the head of strategy and policy in the Office of the President and from 2000 to 2002 as the principal private secretary to the president. From 2002 to 2006, Himbara worked in South Africa, where, among other projects, he was the lead consultant for teams that conducted the country’s Ten Year Development Review. Concurrently, he was the lead strategist on a joint Development Bank of South Africa-University of Witwatersrand’s Knowledge Management Africa.

Himbara returned to Rwanda in 2006 after President Kagame offered him a leading role focused on socioeconomic development. Tasked with improving national competitiveness, Himbara spearheaded efforts that ultimately improved Rwanda’s ranking in the World Bank’s annual Doing Business report from 143rd to 67th out of 183 countries; Rwanda was named top reformer by the World Bank’s Doing Business Report, 2010. In this phase, Himbara set up and headed the Strategy and Policy Unit, Office of The President. In this capacity, he led the establishment of the Rwanda Development Board (RDB) and was its founding Chairperson. He also led the setting up of the Institute for Policy Analysis and Research (IPAR), and became its founding chairperson. In addition, Himbara was the chairperson of the World Bank-funded Human and Institutional Development Agency (HIDA).

Prior to his time in Rwanda, Himbara was based in South Africa working as a private consultant; major assignments included lead consultancy on trade and investment harmonization for the Southern African Community and lead strategist on Indonesian export policy into South Africa. He also lectured on economic development as a senior lecturer at the University of Witwatersrand from 1994 to 1997 and was an assistant professor at Southern University in Louisiana, USA, from 1991 to 1993.

Himbara completed his PhD in political economy at Queen’s University in Kingston, Ontario, Canada, in 1991. He is widely published on social and economic development in leading journals and online. Himbara’s dissertation on the role of domestic entrepreneurs and the state in socioeconomic transformation was published as a book in 1994: Kenyan Capitalists, the State, and Development. His most recent book, Kagame’s Economic Mirage, waspublished in 2016.