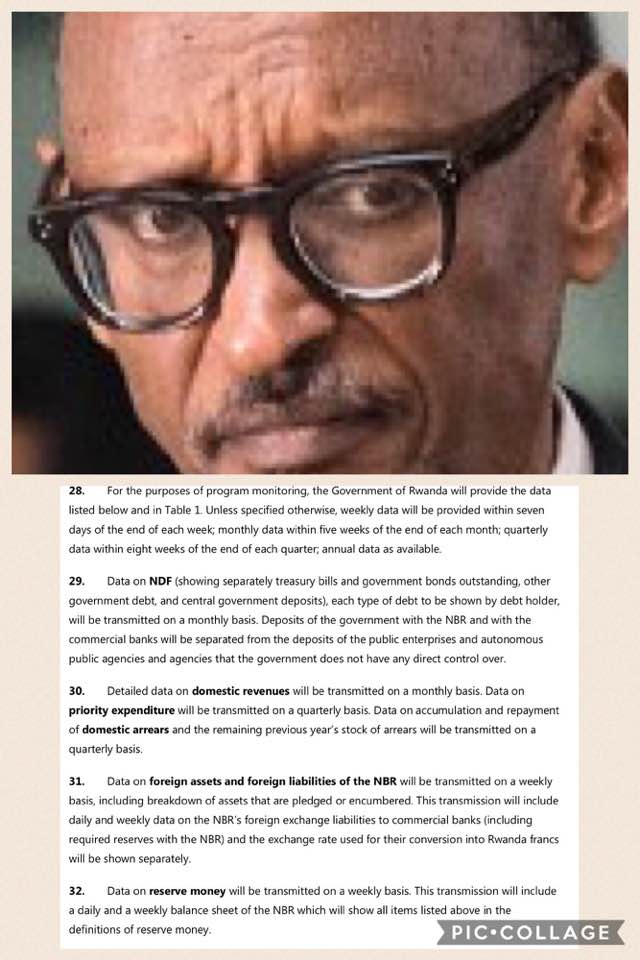 The Rwanda president Paul Kagame runs the country as his personal property. His famously women-majority parliament is dead. It can’t hold Kagame accountable. So who holds Kagame accountable? The donors do, especially the International Monetary Fund (IMF) which has a very tight leash on him.

The regime is obligated to summit weekly, monthly, and in some cases, even daily reports to the IMF depending on the issue.

Here is the daily, weekly, and monthly schedules of how the regime must keep the IMF informed, in order to keep donor support:

* “Data on foreign assets and foreign liabilities of the NBR will be transmitted on a weekly basis, including breakdown of assets that are pledged or encumbered. This transmission will include daily and weekly data on the NBR’s foreign exchange liabilities to commercial banks (including required reserves with the NBR) and the exchange rate used for their conversion into Rwanda francs will be shown separately.”

* “Data on reserve money will be transmitted on a weekly basis. This transmission will include a daily and a weekly balance sheet of the NBR which will show all items listed above in the definitions of reserve money.”

* “The authorities will inform the IMF staff in writing prior to making any changes in economic and financial policies that could affect the outcome of the financial program. Such policies include, but are not limited to, customs and tax laws, wage policy, and financial support to public and private enterprises.”

When you hear Kagame next time boasting about being in control of the Singapore of Africa, remind him that he is lying to himself and to the Rwandan people. Countries take control by building real economies – not fake ones based on planting palm trees on Kigali streets to impress.

Kanyarwanda - 12th May 2017
0
By Museminari Damas Marcel To salvage his reputation, and save RPF and legitimize Crystal Ventures as a reputable business entreprise, Kagame ought to abdicate his...