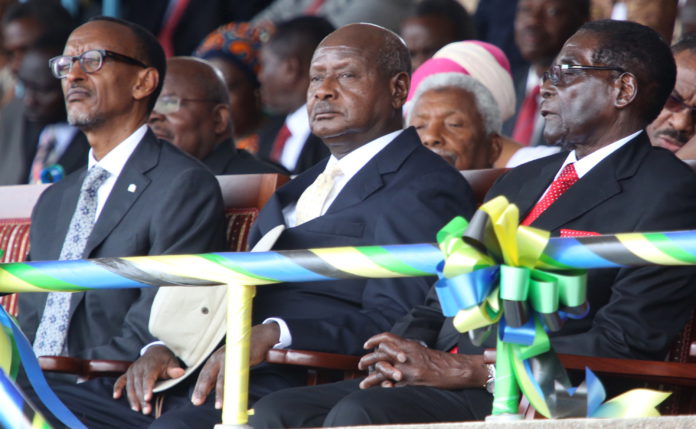 KAGAME: This Magufuli fool in Tanzania. What does he think he is doing?

M7: He will cool down. Even me when i came in 1986 i was like that. Back then, I was calling myself Nelson Mandela.
SALVA KIIR: LOL
KENYATTA: Yes. Sevo when i was a kid my father told me about you. That you said you would hand over power in 10 years. That you would not buy presidential jets. That you would fight corruption. What happened?
M7: haha. I cannot handover power to people without focus. People like Besigye and Amama. Never.
SALVA KIIR: LOL
NKURUZIZA: Salva Kiir can’t you say someting tangible.
SALVA: You Burundian dictator, mind your own business.
MUGABE: Salva & Nkuruziza, you kids cant govern your own countries. Atleast govern yourselves.
SALVA: LOL
KAGAME: Old man @Mugabe , when are you leaving power.
MUGABE: When that British bastard Tony Blair leaves power.
KAGAME: The bastard was forced out in 2007. I now employ him as my adviser on eternal rule.
MUGABE: Alright, i will leave when Pope John Paul II retires.
M7: He is dead. I have been with his successor Pope Francis here in Kampala.
MUGABE: How about the Queen of England. Is she alive? I will leave when she leaves.
MOI: Guys, retirement is good. You still get invited for photo opportunities with the Pope. Saw me with Pope Francis?
M7: Poor man. When in power you get to invite your entire clan for photo opps with the Pope.
SALVA: LOL
MAGUFULI: You guys are using govt internet for this? I hereby shut down this chart. In fact i hereby abolish the internet!

SOS FOR DIANE RWIGARA AND HER FAMILY!

Kanyarwanda - 10th September 2017
0
I am afraid that if no strong and urgent intervention is made in Rwanda, Diane Rwigara and her family are going to be assassinated...